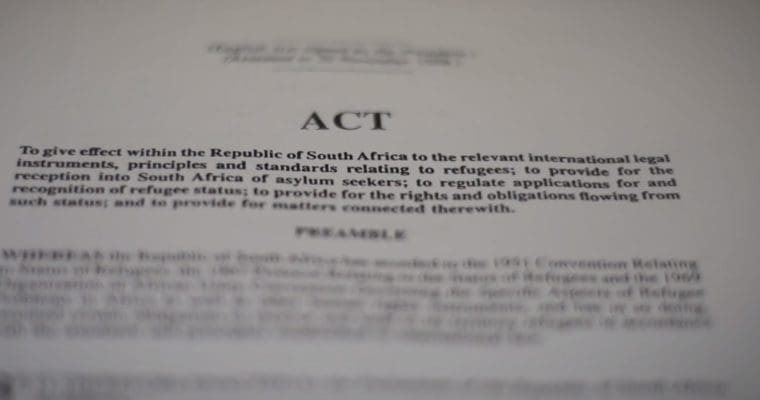 World Refugee Day, celebrated on 20 June, is the perfect time to reflect on the future for refugees in South Africa. Watch our new film, Sanctuary Lost, which explores the future plans of the South African government.

What is Sanctuary Lost about?
Over time, South Africa’s progressive refugee system has descended into a state of crisis. In response, the government now plans to construct detention camps on its northern borders, and a main tenet of the South African constitution – freedom of movement – is set to be compromised. Sanctuary Lost, an unprecedented documentary, combines expert, academic and refugee voices to track the rise and collapse of South Africa’s unique refugee landscape.

In the oppressive context of apartheid, few refugees sought asylum in South Africa. Through archive footage and exclusive interviews, Sanctuary Lost traces the history behind the 1998 Refugees Act, which transformed South Africa from a refugee-producing to a refugee-receiving country. Fast-forward to 2018, and South Africa’s refugee system has descended into a state of crisis. Sanctuary Lost explores the human impact of the imploding system, where huge numbers of asylum applicants, corruption and limited capacity have resulted in asylum seekers being stuck in administrative limbo for up to fifteen years. The government’s closure of several Refugee Reception Offices – and refusal to reopen them – has added more pressure to the struggling system. In what are described as ‘the camps of the future’, the South African government has responded by planning to construct ‘asylum processing centres’. In a series of plans that are reminiscent of Australia’s asylum system (and South Africa’s history of restricted human movement) asylum applicants will not have the right to work and face detention in uncertain circumstances. Only those granted refugee status will be ‘released’ into South African society. It is not clear how these centers will be run, or who will fund them.