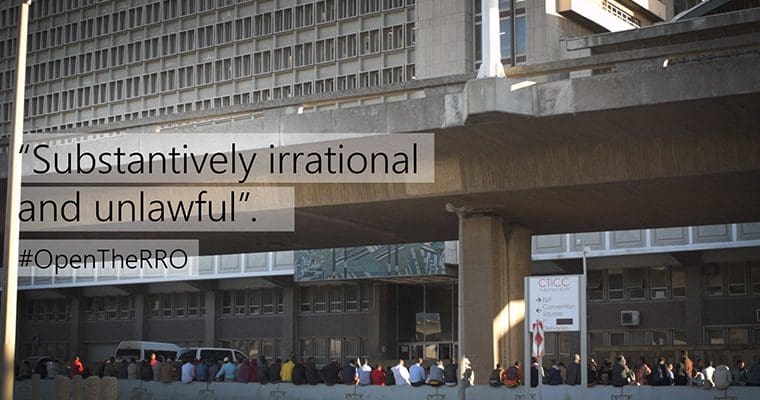 What is a Refugee Reception Office (RRO)?

An RRO is a facility run by the Department of Home Affairs which is the primary point of contact for asylum seekers and refugees with the government. It is where asylum seekers are required to apply for refugee status, where interviews are conducted, where permits are renewed, and where refugee status documents are handed out. Initially, the Department established five RROs in urban areas – Cape Town, Durban, Johannesburg, Port Elizabeth, and Pretoria, with the Musina RRO established in 2008. Since 2011, three RROs have been closed – the Johannesburg RRO was closed entirely in 2011 and the Port Elizabeth RRO and Cape Town RROs were closed in 2011 and 2012 to new asylum applications but continue to assist asylum seekers who lodged their applications prior to the closures. Currently there are three fully functional RROs in Durban, Musina, and Pretoria and asylum seekers can lodge applications at these RROs only.

What is the process for someone applying for asylum?

Refugee status is granted when the applicant is believed to be in need of protection. A refugee is a person who cannot return to their country of origin because their life would be at risk, either due to persecution or due to conflict. The exact definition of a refugee, in terms of South Africa law, is set out in Section 3 of the Refugees Act. An asylum seeker in South Africa is required to lodge their application for asylum in person at an RRO. The asylum seeker is required to fill in a prescribed form and undergo an individual refugee status determination interview to examine the merits of their claim. If the individual is rejected at this level, they may then either request an appeal hearing or submit written reasons as to why they require international protection. Throughout this process, the asylum seeker is to receive documentation to legalise their stay in South Africa in the form of a temporary asylum seeker permit. During the adjudication process, the asylum seeker must continually renew his or her documentation every one to six months by visiting an RRO. While the process is envisioned to be finished within six months, it regularly takes many years and as long as a decade or more. This requires an asylum seeker to make numerous visits to RRO’s before receiving a final status determination on their application. 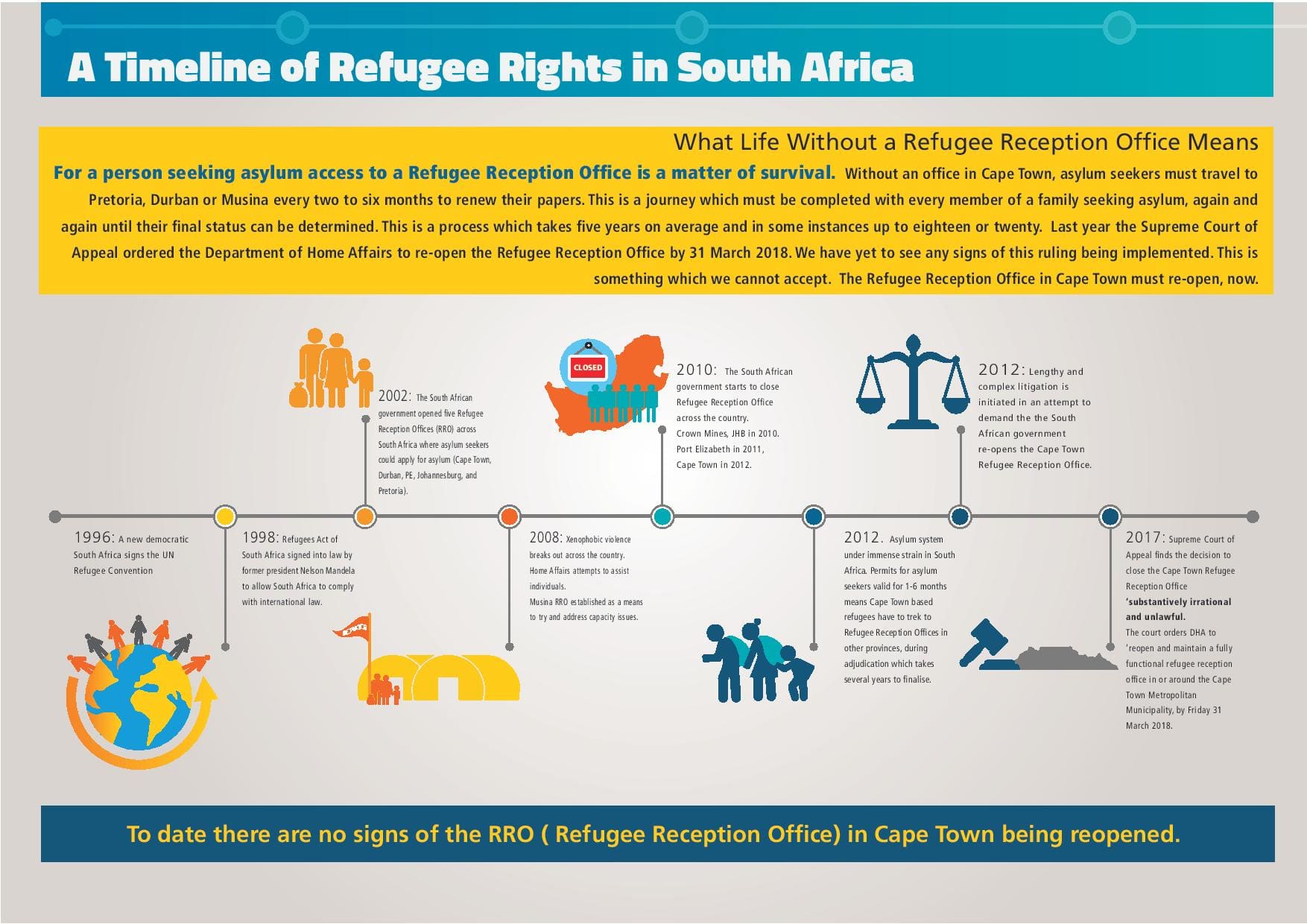 Why was the Cape Town RRO closed?

The Department of Home Affairs closed Cape Town RRO in July 2012 for new asylum applications. The closure meant the Cape Town RRO was no longer fully functional and would operate only for those who lodged claims prior to the closure. Asylum seekers who arrived after the closure had to apply at the remaining fully functioning RROs – Durban, Musina and Pretoria – and then return to the RRO of application for any further administration of their claim, including interviews, the joining of family members to their file, and permit renewals. The Department of Home Affairs has stated the Cape Town RRO was closed due to the undesirability and difficulties in operating urban RROs, the geographic position of Cape Town in relation to the fact that many asylum seekers enter South Africa on the northern borders, and to control the asylum seeker process as the Department contends that many asylum applications are made by economic migrants abusing the asylum system.

The closure of urban RROs undermines the entire refugee protection framework established by the Refugees Act and each of the closures has been found unlawful by the courts. The Scalabrini Centre of Cape Town challenged the initial closure of the Cape Town RRO in 2012 represented by the Legal Resources Centre. The case progressed to the Supreme Court of Appeal (SCA) which found the closure unlawful due to the Department’s failure to consult with the public in an open and frank manner. The court found the Department’s consultations over the future of the Cape Town RRO ‘misleading’ and was ‘inconsistent with the responsiveness, participation and transparency that must govern public administration.’ The SCA ordered the Department to consult with stakeholders and to subsequently make a fresh decision about the status of the Cape Town RRO.

This decision was again challenged in the courts by the Somali Association of South Africa and the Scalabrini Centre of Cape Town along with affected asylum seekers, again represented by the Legal Resources Centre. In 2017 the SCA found the Department’s decision to close the Cape Town RRO ‘substantively irrational and unlawful’ as the Department had ignored relevant facts, had failed to consider alternative premises, and had made the decision to close the RRO for ulterior purposes. The Department sought leave to appeal to the Constitutional Court but the Constitutional Court declined to hear the appeal, stating that there were no prospects for success. As a part of its judgment, the SCA also ordered the Department to provide progress reports regarding the re-opening on a monthly basis to demonstrate ‘what steps have been taken and what progress has been made to ensure compliance’. To date the Department has failed to provide any such reports. The courts have found the other RRO closures in Johannesburg and Port Elizabeth unlawful on similar grounds; the SCA found the closure of the Port Elizabeth RRO unlawful in 2015 and ordered the Department to re-open the RRO. As of March 2018, this RRO too remains closed despite the ruling of the court. 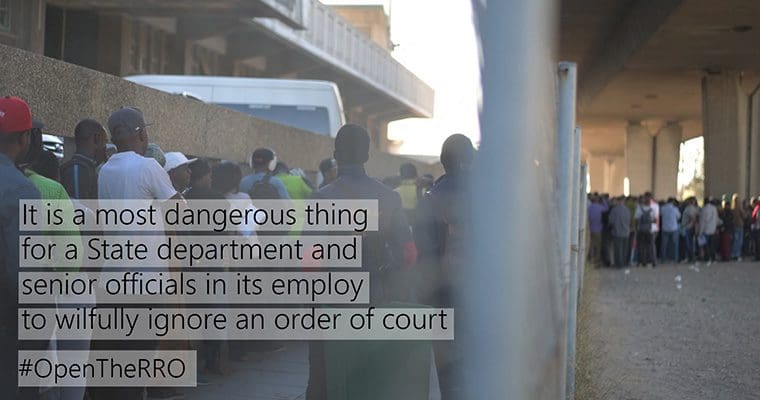 Why does Cape Town need an RRO?

The Cape Town RRO, and urban RROs in general, are critical components of South Africa’s asylum system. Without them access to asylum procedures is restricted, family units are separated, the adjudication process is delayed, and asylum seekers are unable to keep their documentation valid. The closure of three of the six fully functional RROs has made access to the asylum system extremely difficult for many asylum seekers. With the closure of the Cape Town RRO, previously the second busiest RRO in the country, access at the remaining RROs has become more difficult and those RROs have struggled to provide services.

These challenges have prolonged an already lengthy refugee status adjudication process into one that routinely takes many years. The systemic challenges and poor-decision making in the refugee status process mean that individuals are routinely denied refugee status without proper consideration of their asylum claim. This in turn means the appeal process is critical for refugees to attain refugee status, but the high rate of first-instance rejections means the Refugee Appeal Board is overburdened with cases and currently has a backlog of at least 130,000 cases.

With the urban RRO closures, asylum seekers are often forced to take regular – and sometimes dangerous – journeys to extend their asylum seeker permits. This leads to a situation in which many asylum seekers’ permits expire, leaving them undocumented and in a vulnerable position. This makes the administration of the asylum system more difficult and adds to the delays and backlogs mentioned above. In short, given the difficulties asylum seekers experience in attaining refugee status, the Cape Town RRO is critical to allowing them to live in stability and dignity before they attain refugee status.

Watch the story of Mariam to understand how the closure affects individual refugees, by clicking here.

The Department of Home Affairs is required to reopen – and maintain – a fully functioning RRO by 31 March 2018. This means that newcomer asylum seekers should be able to apply for asylum and have their asylum claims fully adjudicated on in Cape Town. Asylum seekers with permits from other RROs but who are residing in Cape Town must also be assisted to finalise their claims in Cape Town. Once re-opened, the Cape Town RRO should be properly maintained and be able to provide proper services to asylum seeking clients and refugees. 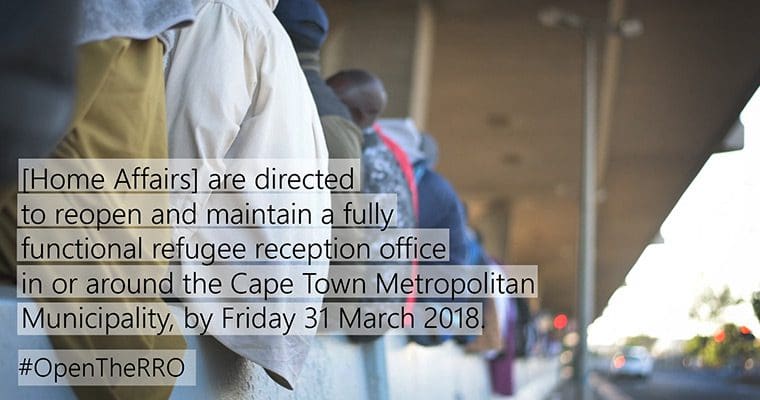 What are the solutions to the challenges in the asylum and immigration regime?

The challenges facing asylum seekers and refugees are significant but there are solutions:

1. Implement the Refugees Act
The Refugees Act has been labelled by former UNHCR High Commissioner António Guterres as ‘one of the most progressive in the world’ and provides a strong urban refugee protection system. If implemented properly, it can set an example for refugee protection around the world. Proper implementation means implementing the asylum regime in a lawful manner in line with the Constitution and Refugees Act. It also means addressing the systemic challenges in refugee status determination, rooting out corruption, and increasing efficiency. Proper implementation and an efficient asylum system are in everyone’s interest.

2. Implement an immigration regime that promotes development
The Immigration Act, the legislation regulating regular immigration matters, does not allow for the legal migration of low to medium skilled migrants. This does not match the reality of migration in southern Africa. Consequently, many individuals who migrate for non-refugee reasons apply for asylum due to a lack of knowledge on the asylum system and because of the lack of other viable options. As the National Development Plan has recognised, migration is likely to increase in South Africa and it should be harnessed to promote development rather than work against it. The Department’s 2017 White Paper on International Migration also recognises this imbalance, it calls for policy interventions to allow for carefully managed economic migration from neighbouring countries, including a regularisation programme to provide permit options for undocumented migrants already in South Africa, the introduction of new visa options to cater to economic migrants in the region, and a stronger focus on employers who exploit undocumented migrants. Such an approach is in line with the UN’s 2030 Agenda for Sustainable Development which recognises that migration can play an integral role and contribute to sustainable development. The introduction of these progressive immigration policies would lessen the burden on the asylum system which would in turn allow for a more effective asylum process that can be focused on providing the international protection so many refugees require.

The Scalabrini Centre of Cape Town firmly believes that a progressive immigration regime, as outlined in the White Paper, would complement our strong urban refugee protection system and provide for development and stronger communities in South Africa and in the region.