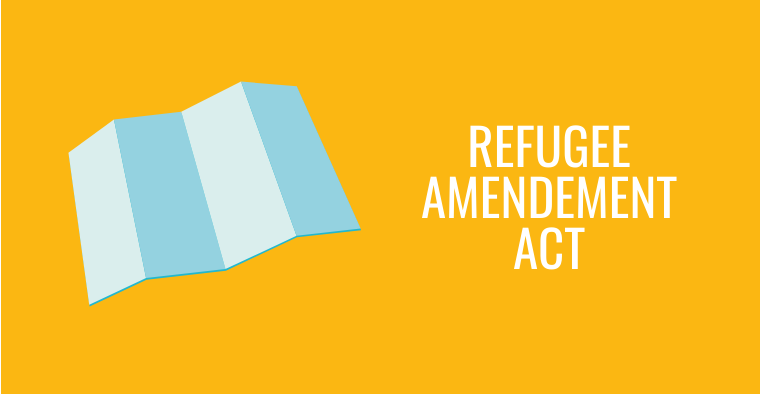 Refugee Amendment Act Infographic
The Refugee Amendment Act was signed into law on 14 December 2017, but can only be properly implemented once the Draft Regulations are finalised. There is currently no time frame for this. We summarise the main changes that the act proposes.
Download the infographic

Keep up to date with our Teach-Yourself Series – condensed articles on migration issues in South Africa. Our articles and infographics aim to spread awareness on South Africa’s migration landscape, and our standpoints on the issue. This is a joint initiative between The Scalabrini Centre of Cape Town and Sonke Gender Justice and Lawyers for Human Rights. The first four topics in this series are: the Refugee Amendment Act, the White Paper on International Migration, birth registration and health care access.

The Refugees Amendment Act, which was signed into law on 14 December 2017, can only be implemented once the Draft Regulations are finalised and published in the Government Gazette. At this time, it is still unclear when the Amendment Act will go into force – if at all.

As with any law in South Africa, public involvement is part of the process. The Advocacy Programme at the Scalabrini Centre of Cape Town has provided the South African government with submissions on the Refugee Amendment Bill and comments on the Draft Regulations to the Refugees Amendment Act. In short, we are concerned that, by creating fundamental changes, this Act would infringe on the constitutional rights of asylum seekers and refugees in South Africa.

The Refugees Amendment Act is being enacted at a time of change in South African migration policy. the White Paper on International Migration for South Africa sets out a general blueprint for future migration policies, plans to add severe restrictions the refugee system (read more about it here). In this way, the Refugee Amendment Act seems to be ‘laying the groundwork’ for such changes.

Do you have further questions on the White Paper on International Migration? Please visit www.genderjustice.org.za, www.scalabrini.org.za, or contact lotte@scalabrini.org.za and get in touch!

The Refugees Amendment Act would lengthen the amount of time a refugee has resided in the country before being allowed to apply for certification to apply for permanent residence from the current five years to ten years. The UNHCR recommends that the period of time before recognising a permanent status should be five years. In our comments, we recommended that the time period remain at five years, especially considering the protracted determination process which means many remain on asylum temporary permits for many years, in order to qualify for application to permanent residency.

The fact that the Refugee Appeal Board is severely over-stretched and under-resourced is well documented, and has resulted in asylum seekers waiting for several years for hearings and outcomes. The Refugees Amendment Act would create the Refugee Appeals Authority, which would allow for one member to take a decision (rather than the current quorum) and for more flexible appointments. Scalabrini’s submissions agreed with some of the proposed improvements to the appeals procedure, and suggested an amnesty project to allow the Refugee Appeal Board to clear the huge backlog that they currently face.

The Refugees Amendment Act would, if implemented, expand the reasons under which a refugee status could be withdrawn. The Act, read with the Draft Regulations, propose a list of actions that would result in the withdrawal of refugee status – including ‘seeking consular services [and] assistance with documentation.’ In Scalabrini’s submissions and comments, concern is raised around the fact that asylum seekers are required, by the Department of Home Affairs, to produce documentation such as marriage certificates – which would require a visit to their consulate, and would risk them having their status withdrawn. The Act would allow the Minister of Home Affairs to announce a cessation upon an entire category of refugees (or an individual), which we highlight would bypass the checks and balances currently attached to cessations

If implemented, the Refugees Amendment Act would expand the reasons for which an asylum seeker could be excluded from refugee status. This would include the committing of a Schedule 2 crime, entering illegally into South Africa, or an offence related to fraudulent documentation. It would also include those who are fugitives from justice in countries ‘where the rule of law is upheld by a recognised judiciary’, and those who do not apply for asylum within five days of entering South Africa. These proposed changes do not adhere to international refugee law, which clearly outlines that refugees should not be penalised for irregular entry into South Africa. UNHCR Guidelines further clarify that ‘the proportionality of the gravity of the offence in question should be weighed against the consequences of exclusion for the individual concerned’.

Under the Refugees Amendment Act, an asylum claim will be considered ‘abandoned’ if an asylum seeker does not attend a Refugee Reception Office in the month after the expiry of their asylum permit (unless they have a ‘compelling reason’). In our experience, the expired permit process has been fraught with difficulty for asylum seekers for years and pushes individuals into undocumented statuses. Entering Refugee Reception Offices is no easy task; asylum seekers have to visit Refugee Reception Offices several times before getting documented. For these reasons, many asylum seekers would have their claim deemed ‘abandoned’ – which, in our opinion, places administrative matters over protection and the principle of non-refoulement and is in contradiction to South African case-law which confirms that asylum applications cannot be denied on grounds of delay and that asylum applicants are, even prior to applying, protected by the Refugees Act. Scalabrini’s submissions suggested twelve months given the practical realities as a more realistic period before considering an asylum claim abandoned.

The Refugees Amendment Act requires an asylum seeker to report to a Refugee Reception Office no later than five days after arriving in South Africa – or they can be excluded from refugee status. Furthermore, those who do not have an ‘asylum transit visa’ will be interviewed by an immigration officer to determine whether they have ‘valid reasons’ for not holding this transit visa. In the daily work of Scalabrini, asylum applicants often report difficulties in entering a Refugee Reception Office and applying for asylum. Five days to apply for asylum is not realistic – and we expressed concern in the submissions that denying someone an application to asylum simply because they apply on the sixth day is not in line with international refugee law. Given the current backlogs and protracted adjudication processes, this provision could create significant burdens for asylum seekers – and extra layers of administration for the Department of Home Affairs.

Under the Refugees Amendment Act asylum seekers will have to declare all existing dependents family upon their first application in order to have them documented in their asylum file. For those fleeing conflicts in stressful conditions, and with limited English, ensuring all family members are on the asylum application is not necessarily simple. In the submissions, we suggested that family members can be joined into an asylum file at a later date, along with proof of their relationship to the applicant.

Under the Refugees Amendment Act, the Director-General of Home Affairs would be able to establish, and disestablish, as many Refugee Reception Offices as he or she regards as necessary – ‘notwithstanding the provisions of any other law’. He or she would also be able to direct any category of asylum seekers to report to any ‘place specially designated’ when lodging an application for asylum. In Scalabrini’s submissions, concerns were around what an ‘other place specially designated’ might mean. We are especially concerned that it may result in what may essentially be de facto refugee camps or detention centres for certain categories of asylum seekers. Home Affairs has closed several Refugee Reception Offices since 2010, all of which were found unlawful by the courts. The laws with which opening or closing Refugee Reception Offices must comply with is not clear in the Refugees Amendment Act. This is of concern to us – especially considering the recent rulings on RRO closures. This amendment might well be paving the way towards the plans to ultimately construct ‘asylum processing centres’ on the northern borders of South Africa.

Under the Refugees Amendment Act, asylum seekers would no longer have the automatic right to work and study. This right would only be ‘endorsed’ on an asylum visa following an assessment process to determine whether the applicant could support themselves in any way (including with UNHCR’s support). If not, they would have the right to work endorsed – but they would need to show proof of employment within two weeks in order to remain with this right. If a workplace does not provide this proof of the asylum seeker’s employment, the employer can face a hefty fine. For those who are studying, the Refugees Amendment Act and Draft Regulations are not completely clear. Proof of studying at a South African education institution will be needed by asylum applicant, implying that the right to study will not be automatically granted.

Migrant and Refugee Access to Public Healthcare in South Africa