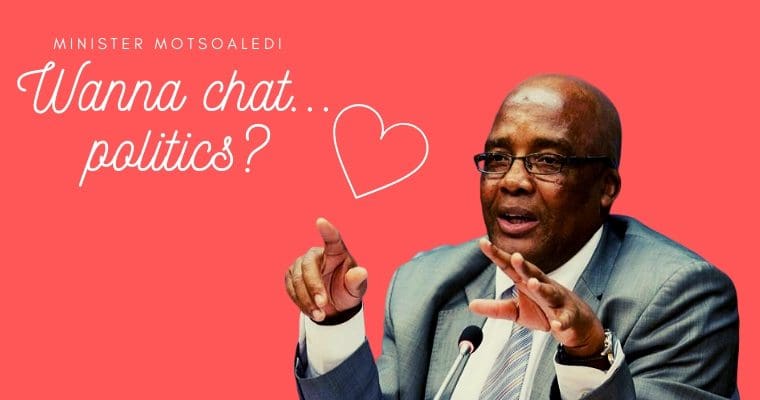 This Valetine’s day, we are sending #LoveLettersToMotsoaledi, calling on him to open dialogue with us on new refugee laws. #ChatUsUpMotsoaledi! 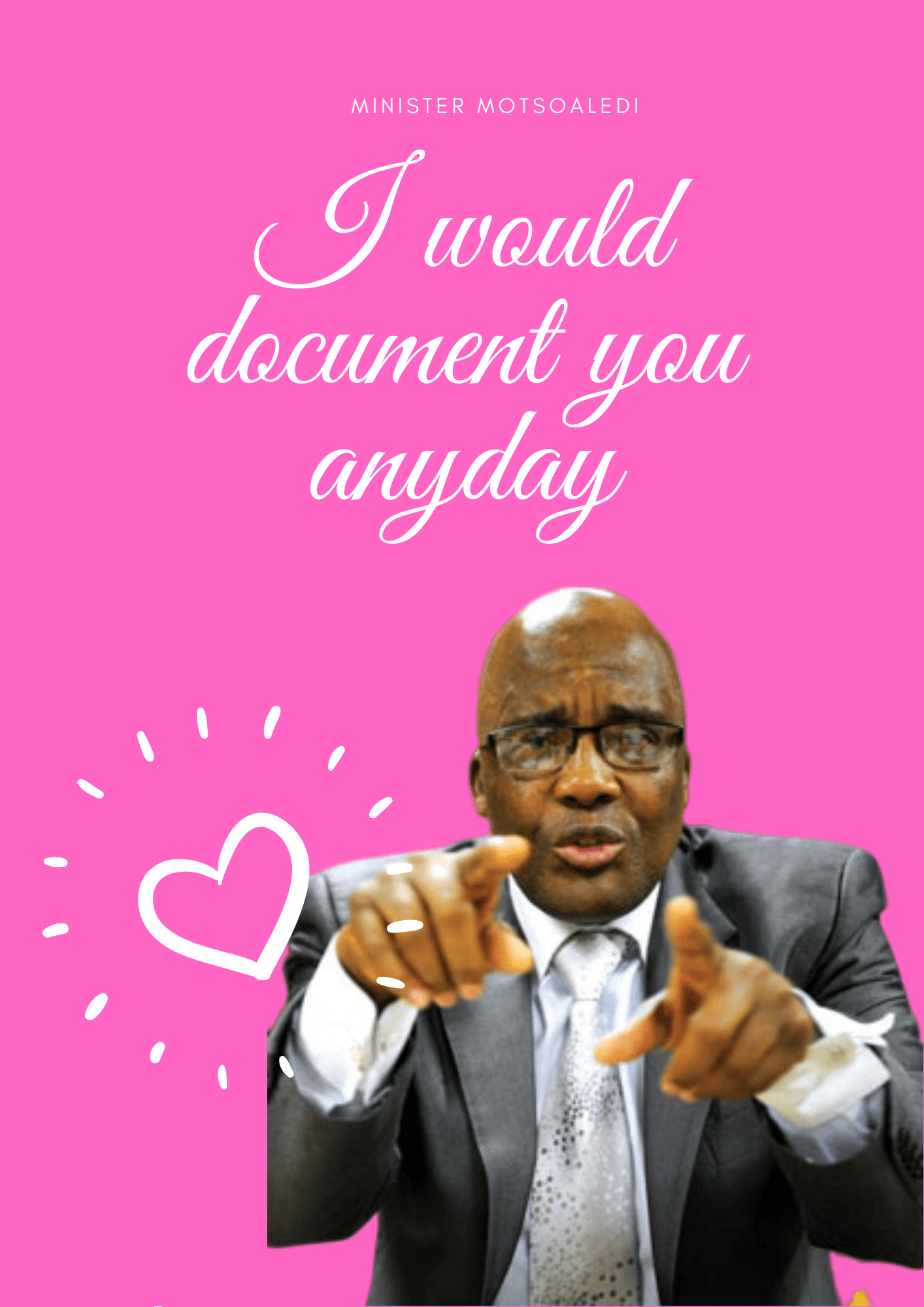 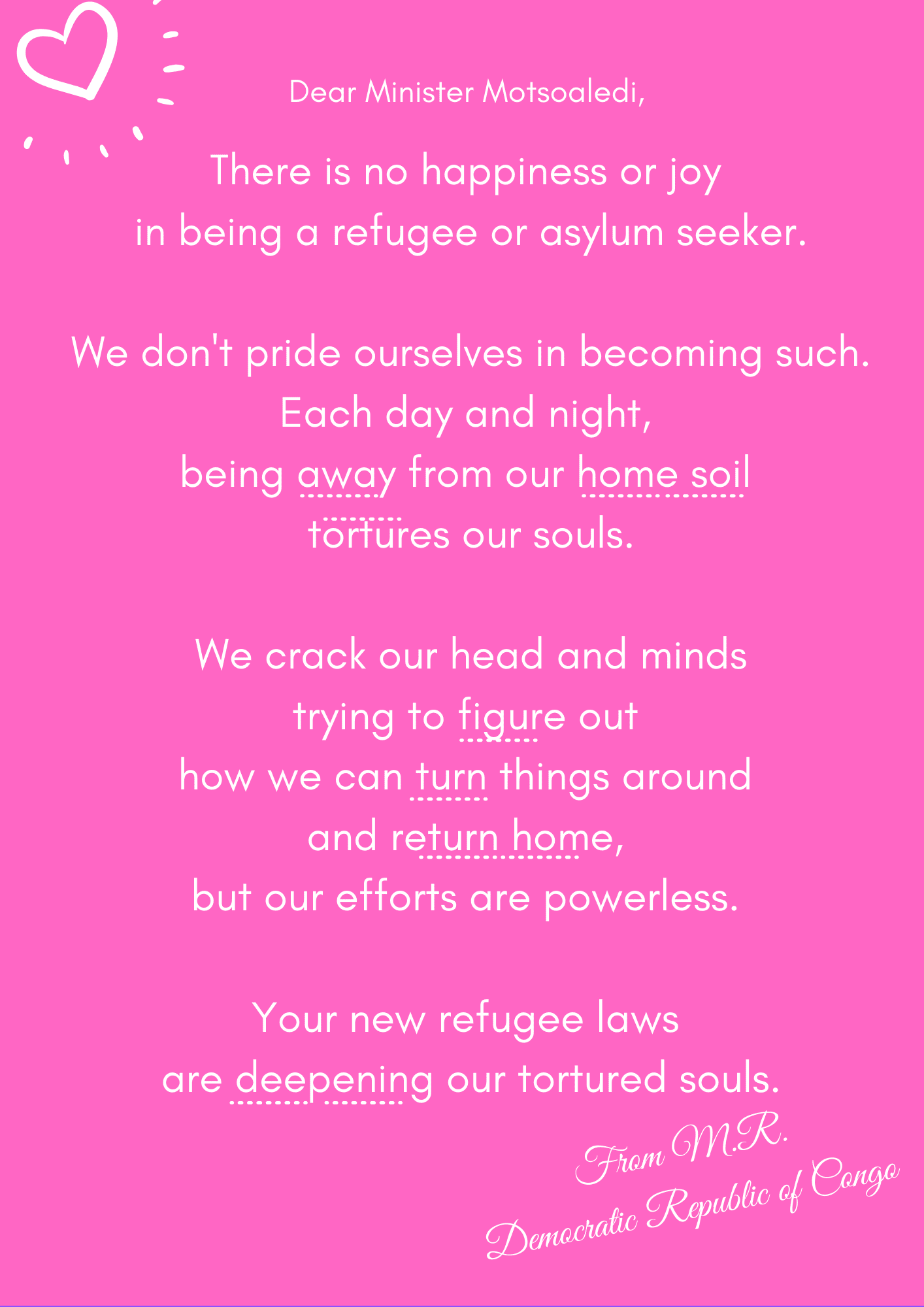 “I would document you any day.”

Under the new refugee law, asylum-seekers can be excluded from the asylum system more easily. This will only result in increased numbers of undocumented people – which is not in the interests of the individuals, nor the South African state itself.

We advocate for fair documentation in South Africa, ensuring all those within our borders are properly documented. We continue to highlight the need to implement wider visa options, as envisaged in the White Paper on International Migration. We also advocate for a safer, more efficient asylum system in South Africa, which will ensure protection to those that require it.

The new refugee laws prescribe that asylum-seekers apply for asylum within five days of arriving in South Africa. There are a limited number of Refugee Reception Offices across South Africa, and accessing them is very difficult. In light of this, it is unreasonable to demand that someone apply for asylum within five days of arrival without ensuring adequate capacity on the part of DHA.

Furthermore, under the new laws, any asylum-seeker visa that expires for one month or more ‘must be considered abandoned’. Extending an asylum seeker visa is not easy. It requires numerous visits to refugee reception offices. With such an inaccessible asylum system, it is inevitable that many asylum-seekers will – not for lack of trying –find that their asylum claim is considered ‘abandoned’. The risk of deportation that these asylum seekers will face will contravene the principle of non-refoulement and international refugee law. We have written to the Minister about this. 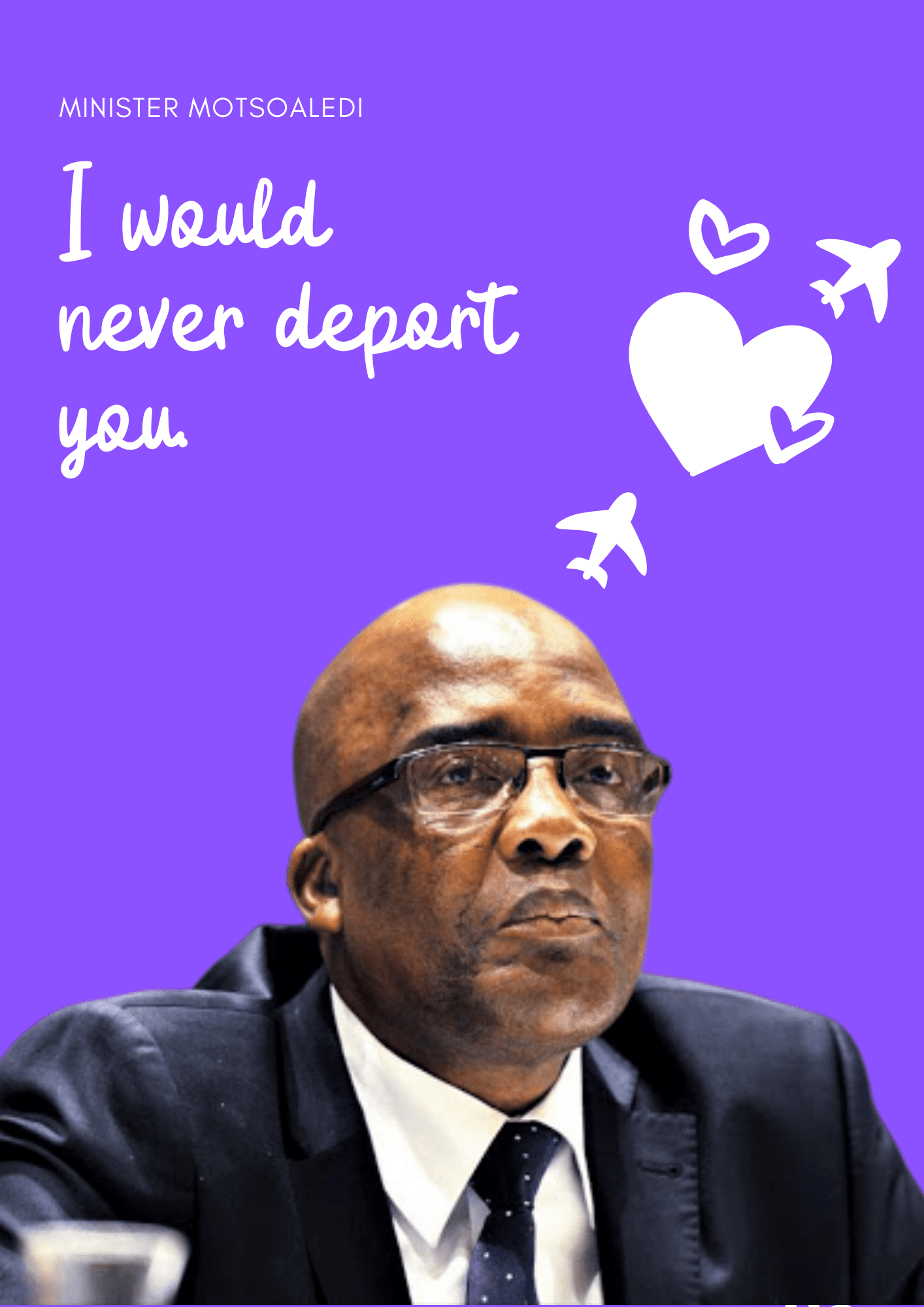 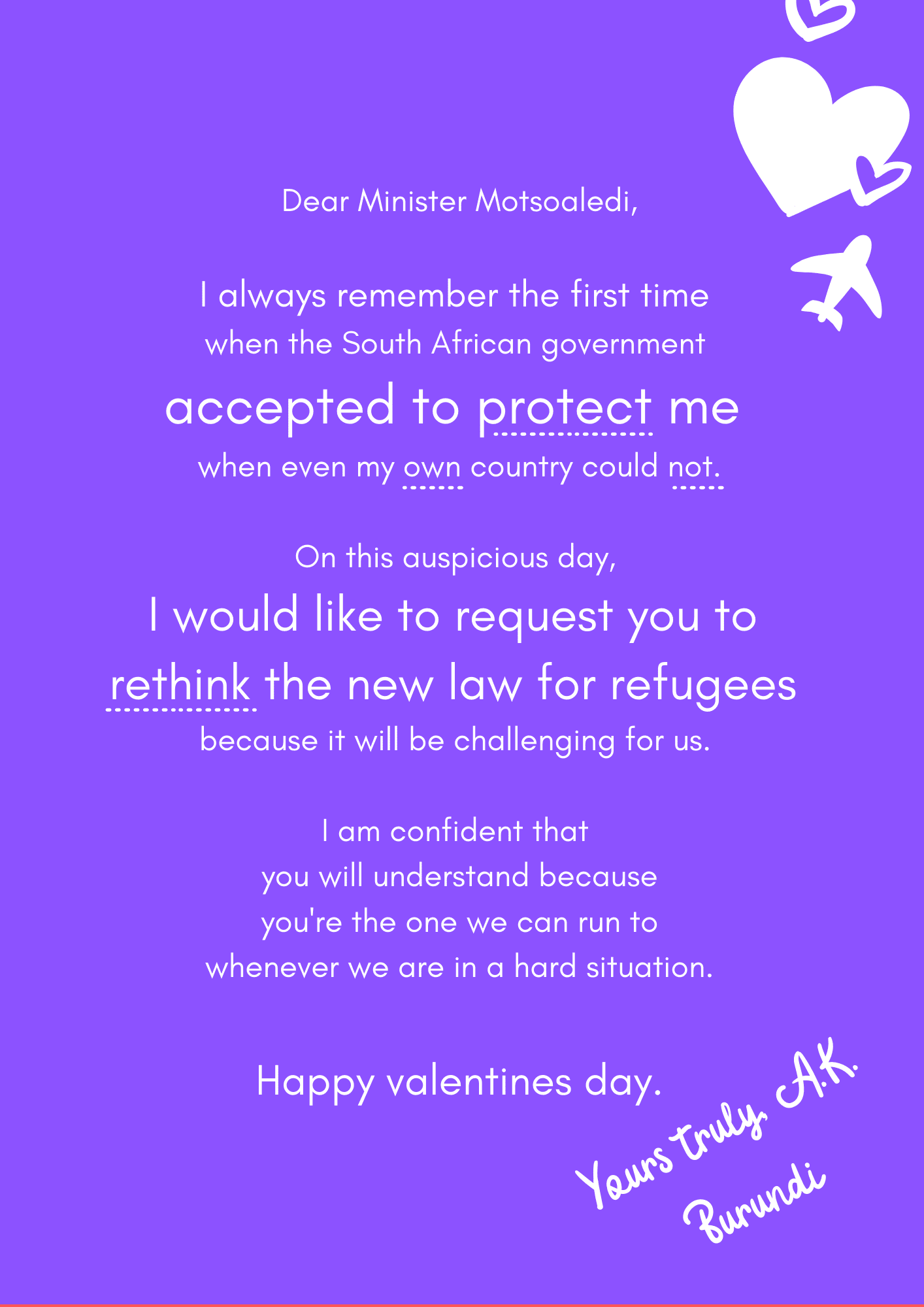 “I would never deport you.”

Under the new refugee laws, there are expanded grounds upon which a person can have their refugee status withdrawn by the South African government. This is known as ‘cessation’. In South Africa, refugee status ensures the protection of individuals fleeing conflict and persecution in their home countries. Withdrawing refugee status could put those people at risk of being deported to a country where there is a reasonable risk to their life. The South African government is bound, by international law, not to deport such people, in a principle known as non-refoulement.

Under the new refugee laws, for example, if a refugee ‘re-avails’ themselves of the protection of their country ‘in any way’, they risk having their refugee status withdrawn. In reality, this is difficult: refugees are required to provide official documentation, such as marriage certificates, to the South African government. Such documentation can often only be sourced from their embassies. However, interacting with embassies is now constitutes ‘re-availing’ oneself of one’s country of origin, which is a ground for the cancellation of refugee status. 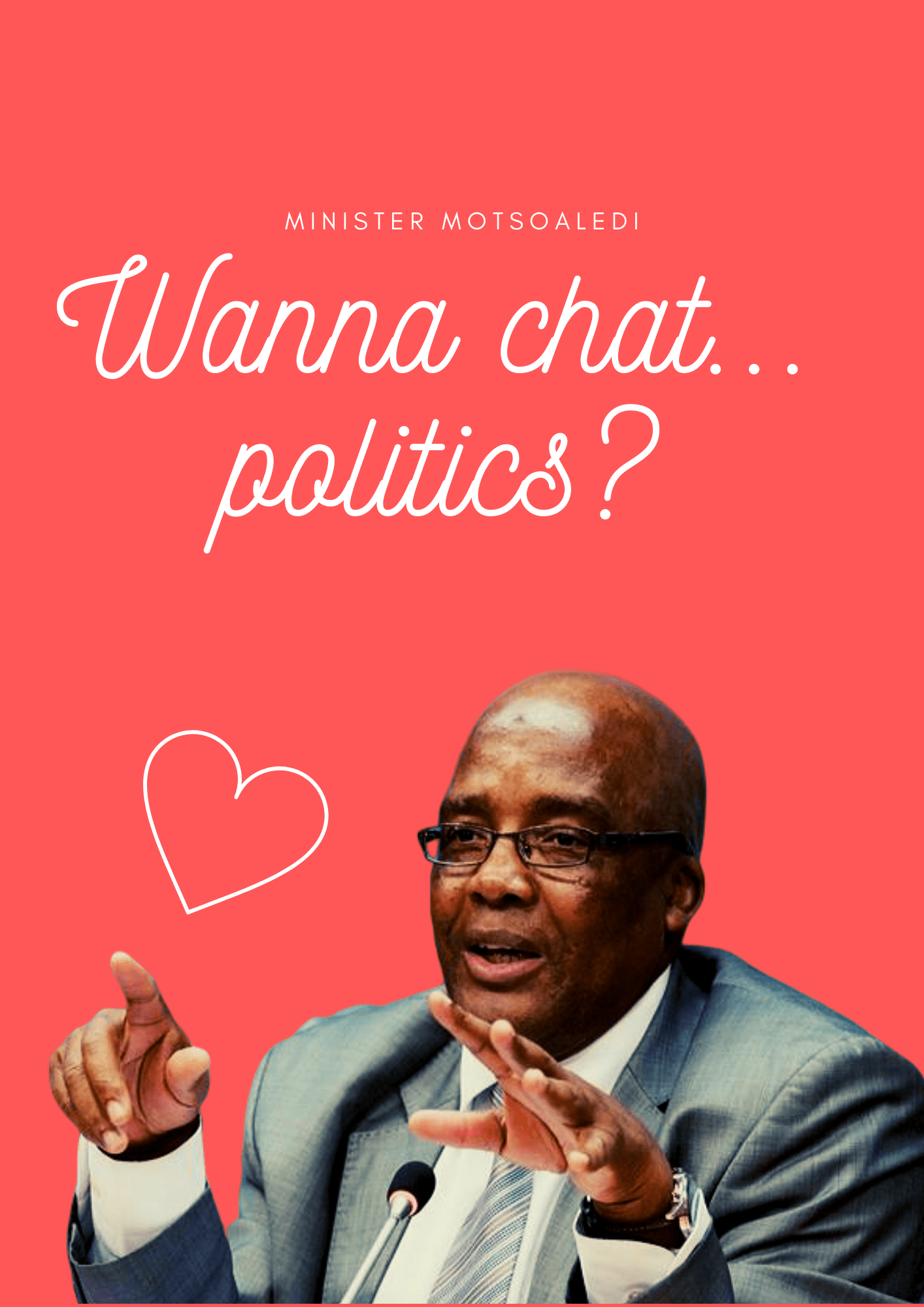 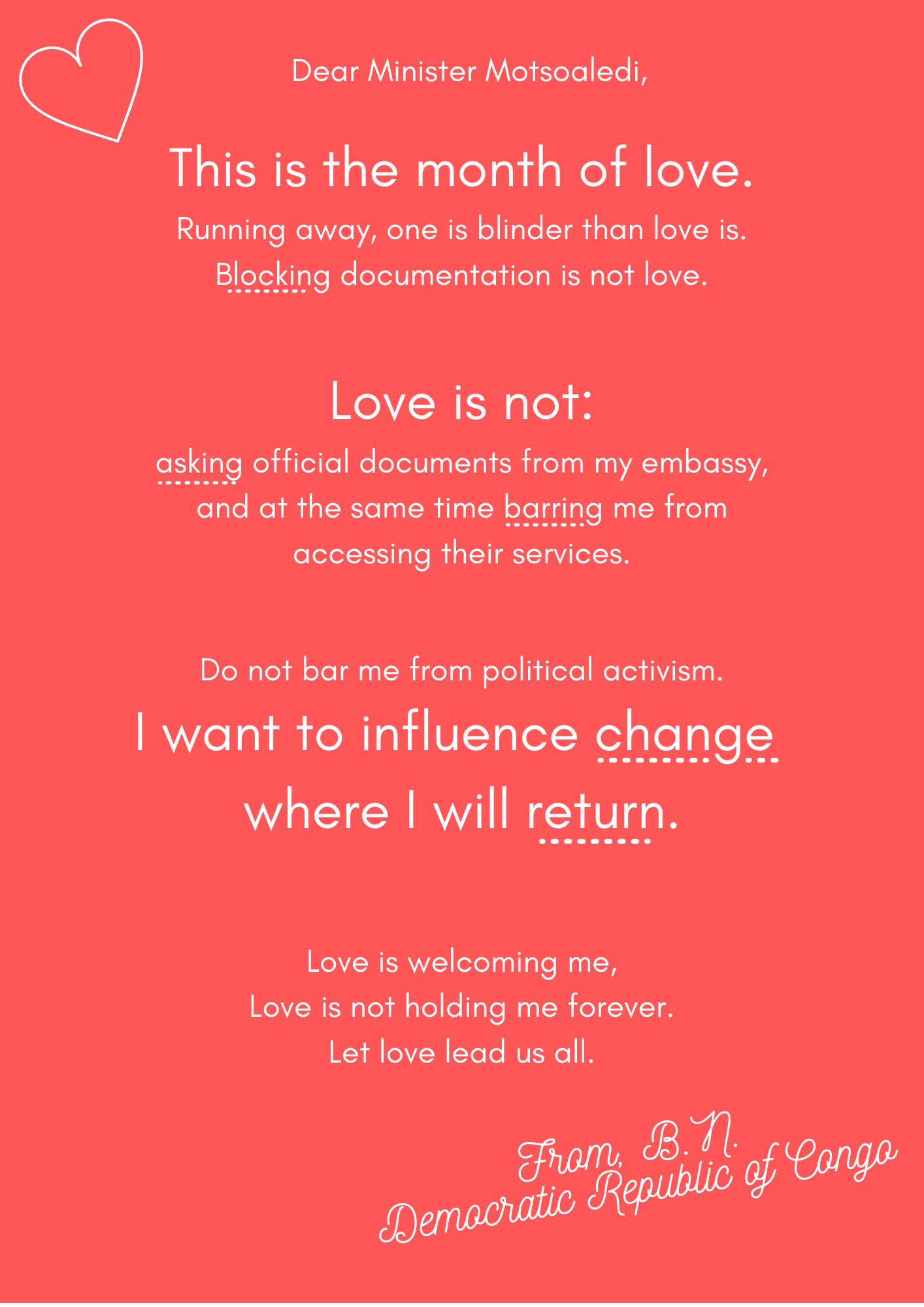 Under the new Refugees Regulations, ‘no refugee or asylum seeker may participate in any political activity’. Refugee communities in South Africa have raised concern about this, as their political activity is often key to improve the very situations that caused them to flee their home country.

Moreover, freedom of expression is a basic right laid out in the South African constitution – and the new regulations infringe on this constitutional right.