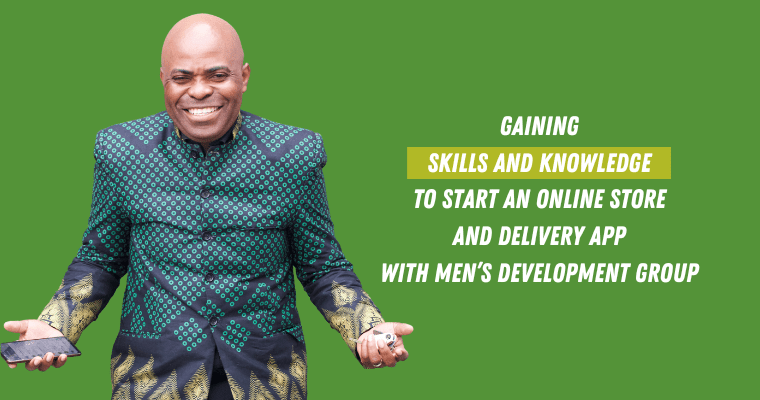 When Mathieu arrived in South Africa 17 years ago, he was told that he only had two options; to become a car guard or a security guard. Over the last few years, he has gained experience in multiple different jobs and now has his own food delivery app. Cape Town has a bustling community of people from all corners of the African continent – with assistance from friends and the Men’s Development Group, Mathieu’s business supplies this community.

Mathieu then set his sights on other work opportunities. From security guard to cashier supervisor at a petrol station, to taxi driver – Mathieu gained work experience in many different areas. The conversations that Mathieu had with other drivers who worked in the tourism industry were what helped him to break into the tourism industry himself.

With a newfound interest in the tourism industry, Mathieu began driving between hotels. This started becoming a regular job. Mathieu explains how one guest that he collected changed his life. “One day, I met one of the guests who told me to do a short tourism course.” He took her advice and completed a course – soon becoming a tour guide and taking people on different tours – a Cape Peninsula tour, a city tour, a township tour and a tour along the Garden Route.

Mathieu’s story is one of building himself up by using his natural smarts and networks. The pandemic then hit South African shores and the tourism industry was no longer operating. Mathieu had to put his thinking cap on again.

One day there was a guest who was with Mathieu on a shopping tour. “He wanted to buy rice and a box of chicken in Sea Point”, Mathieu explains. “The prices were so high, so I called my wife and asked her how much we would pay. I told the guest that he could get rice at a much cheaper price in my area.” This sparked his idea for a food delivery business and app, which he called ‘Send Me Africa’.

When Mathieu first started his business, he realised that he had the ideas and entrepreneurial spirit, but needed to build on his business knowledge and skills. This was where Scalabrini’s Men’s Group came in to assist.

Connecting with the Men’s Group

“Because of the lockdown, I felt like I needed the connection with other men,” says Mathieu when explaining how he came to join Scalabrini’s Men’s Group. Once he had joined the group he told Etienne Ciamala, who leads the Men’s Group, about his business idea. Etienne encouraged him to first come up with a business plan. The Men’s Group also helped with Mathieu’s personal development by introducing him to their parenting workshops, professional development and a small business course.

“When I started my first business, I struggled…but I got the skills and knowledge from the courses I did at Scalabrini,” says Mathieu, “I now want to be able to share that knowledge with my community.” Mathieu and his wife have launched ‘Send Me Africa’. “We are an online store and delivery service. The main aim of the business is to make shopping easy, quick and cheap – providing people with groceries, toiletries and African food.”

Mathieu’s hopes to expand his business by opening a physical store to allow customers the option of collecting products themselves. “If we have the finances, that is where we want to go. For now, you can find us on Google Play Store” says Mathieu. ‘Send Me Africa ’launched its app in June 2022 and can be found on Google Play Store.

The Men’s Group at Scalabrini provides a space for men to come together, identify and address the issues impacting their lives. The Men’s Platform aims to create a network of trust, support, and development. The desired outcomes of the Men’s Platform are to build confidence, enhance self-esteem, gain a sense of direction, and increase motivation and network. If you would like to find out more, send an email to etienne@scalabrini.org.za

Navigating a new digital world with UpLearn and English School