Angolan former refugees, who have been living in South Africa for decades, are being issued
Angolan Special Permits (ASP) by the Department of Home Affairs (DHA) following years of
precarious legality in the country. Whilst we welcome and celebrate the issuance of ASPs, we share
the concerns of these former refugees around their futures – the ASPs expire in 2021 and are nonrenewable.

Fleeing in the late 1990s, Angolans were some of the first refugees in post-apartheid South Africa. In 2013, they were the first refugees in South Africa to have had their status ceased. Upon this cessation, ‘Angolan Cessation Permits’ (ACP) were issued. These permits expired in 2015, upon which the
Scalabrini Centre of Cape Town (SCCT) entered into negotiations with DHA to consider permanent
residency for the group. This resulted in a Court Order issued by the Western Cape High Court, in
which ACP permit holders were asked to provide the Minister of Home Affairs with documentation
proving their socio-economic integration into South Africa and outlining their reasons for wanting to
remain permanently in the country. The applications were made in terms of Section 31(2)(b) of the
Immigration Act, and included police clearance certificates, bank statements, employment contracts
and support letters. On 15 February 2017, the SCCT handed in 160 lever-arch files to DHA,
documenting the lives of 1,757 Angolan applicants. In July 2017, the Minister of Home Affairs issued
a decision to grant rights of permanent residency to the majority of Angolan applicants. DHA is now
beginning to issue these applicants with ASPs.

There are four conditions attached to the ASP. The holder has the right to work and study. However,
the holder cannot apply for permanent residency, the permit is not extendable or renewable and the
conditions of the permit cannot be changed. Each ASP expires at the end of 2021.

The SCCT welcomes the granting of work and study rights, and is thankful that that ASP holders can
now access bank accounts, and other rights afforded to citizens (except for voting and establishing a
political party). We are relieved by DHA’s decision to document this small, integrated and
economically active group. However, the fact that ASPs expire in 2021 creates great uncertainty
regarding the future of this group of people, who have integrated economically and socially over the
last twenty years in South Africa. Indeed, data analysis of ASP applicants shows a high rate of
economic activity (91% of adult applicants were employed) and entrepreneurship (19% of applicants
run their own businesses in South Africa). A quarter of these applicants have South African partners,
whilst 21% have both South African partners and South African children. This level of socio-economic
integration displayed in these applications likely contributed to DHA’s positive decision.

We hope that the DHA will consider extension of the permits in 2018 or granting of permanency as a
more durable solution for this specific group of former refugees.

Read more about the background to Cessation here.

Perceiving migration as an opportunity, the SCCT is committed to alleviating poverty and promoting
development in the Western Cape while fostering integration between migrants, refugees and South
Africans. We provide specialised services including advocacy, welfare, employment assistance and
outreach programmes. Read more at www.scalabrini.org.za.

The Scalabrini Centre of Cape Town (SCCT) and Somali Association of South Africa (SASA) along with our legal representatives the Legal Resources Centre (LRC) have launched a new case against the Department of Home Affairs (DHA) in regards to its non-compliance with orders of the court regarding the operations of the Cape Town Refugee Reception Office (CTRRO). The present case combines two cases – the Scalabrini case and the Nbaya case – both of which found DHA’s policies at the CTRRO unlawful and issued orders requiring DHA to comply. At the present time, both of these orders are not being implemented causing great hardship for asylum seekers.

How many times have you been asked where you are from? It’s a common question – and it is usually easy to answer. For some of our clients, it is the most difficult question of all – and they cannot provide an answer.

What’s the problem?
The Scalabrini Advocacy Programme works with several cases of individuals who are at risk of statelessness. A stateless person is someone who is not considered as a national by any state under the operation of its law. In other words, they have no nationality at all.

The effect of statelessness on youth is particularly devastating.

Young people like Allan, who are at risk of statelessness, take extreme measures to become documented. Our film, Allan, follows a young, undocumented man from Cape Town to Kenya in an incredible journey he is forced to undertake, with his siblings, in order to get themselves documented. It results in tragedy – but Allan’s hardened determination and strength persists.

A scene from Allan.

What’s the solution?
At Scalabrini, the Advocacy Programme assists individuals to establish their nationality through family tracing and visiting consulates. If it is established that an individual is stateless, there are applications that can be made to the Department of Home Affairs, but oftentimes this requires further legal assistance. Within South African citizenship and immigration law, some aspects speak to statelessness. If the Department of Home Affairs had a greater capacity to respond and process such applications, great headway could be made to address the issue of statelessness sin South Africa. Furthermore, if the South African government became signatories to the two international statelessness conventions, mechanisms could be put in place to deal with stateless persons and ensure their protection.
We advocate that the South African government address the issue of statelessness within its borders. Indeed, groups of undocumented people are not conducive to a functioning state. Statelessness is therefore not only a problem for the individuals involved, but an issue the South African state has an interest in resolving.

Want to take action?
Click to watch Allan – share on social media to raise awareness!
Sign the petition to end statelessness in South Africa here.If you have any questions pertaining to Scalabrini’s work on statelessness, please email lotte@scalabrini.org.za.

Scalabrini has published two posters that clarify the difference between a refugee and a migrant.
The posters also seek to raise awareness around the rights and responsibilities of migrants and refugees in South Africa.

These are free resources that other organisations and individuals can use to raise awareness and educate around the issue. Feel free to download, print or share these posters! 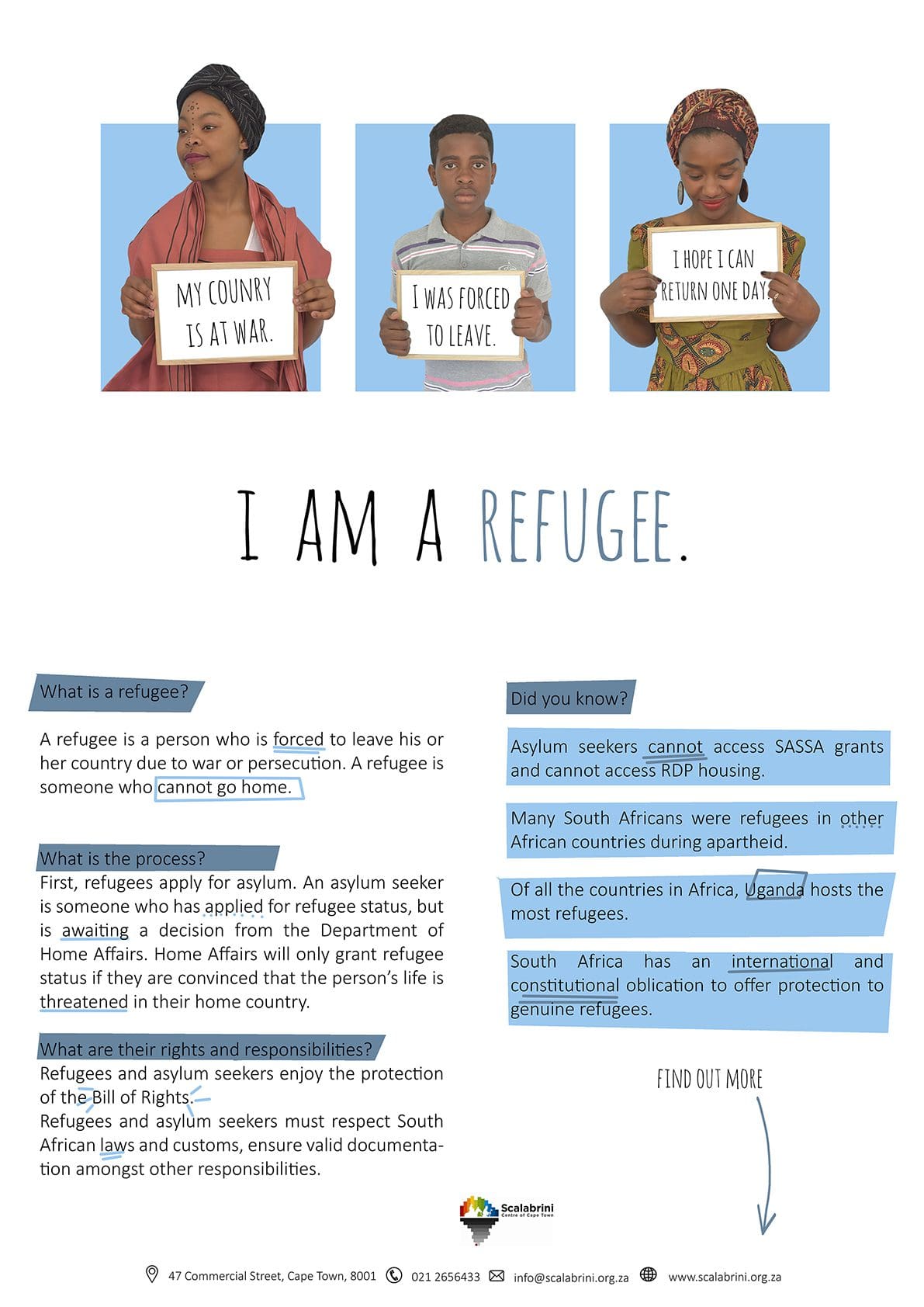 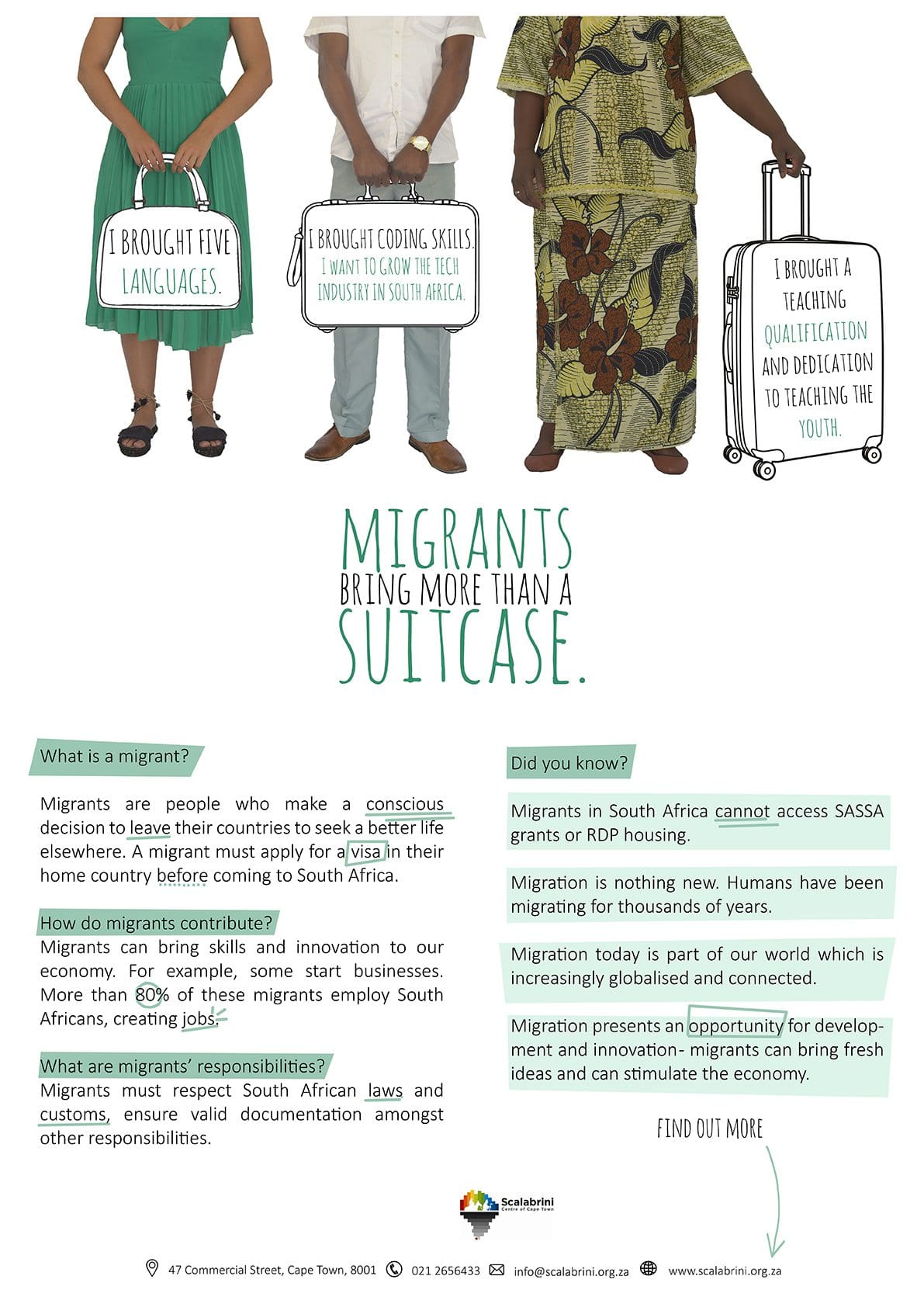