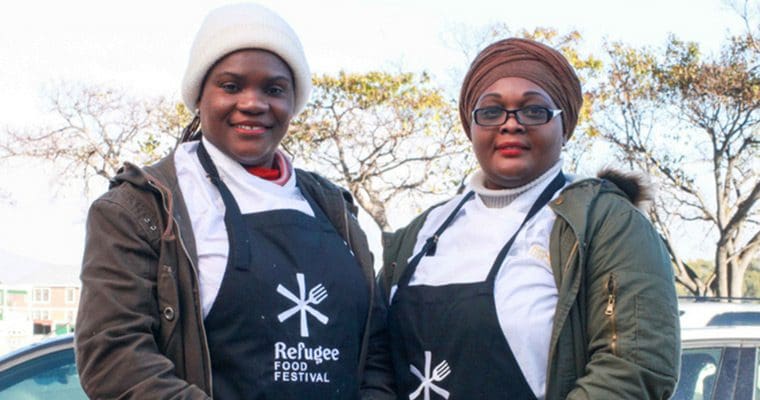 Our communications volunteer, Leensa, reports on the global event.

The Refugee Food Festival showcased chefs creating dishes from countries such as Angola, Ethiopia and Congo. The event took place in diverse locations and venues throughout Cape Town with guest chefs selling at food markets, featuring at restaurants and teaching at cooking classes. This was the first year that Cape Town has been included in the annual and global event – and organisers hope the city will continue to host the festival. The festival, which has been running for three years, was started to celebrate diversity and integration in Europe. It was founded by the Food Sweet Food association with the support of the UNHCR. In Cape Town, the event ran with the support of Scalabrini and other organisations.

The festival kicked off at the Oranjezicht city farm, which hosted a variety of food-stands. Chef Judy cooked up a range of Ethiopian dishes. Her stand stood out, boasting several containers containing colorful sauces. The Injera (traditional Ethiopian bread) she had made was served with a tasty lentil, beetroot and chicken sauces that are meant to be eaten with one’s hands. People were intrigued, approaching her and pointing to the different dishes, eyeing them curiously and asking questions. 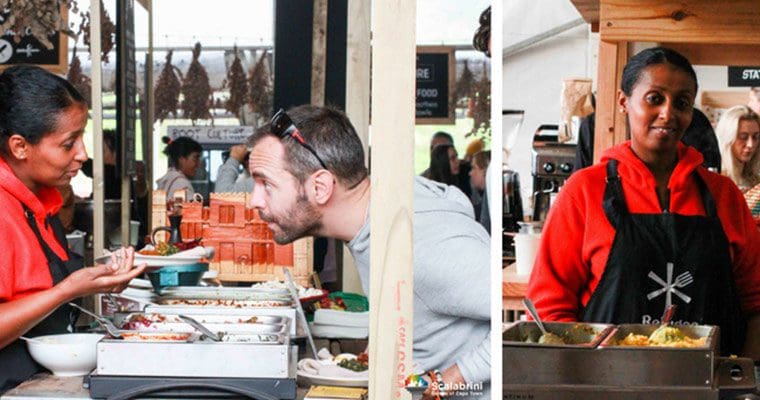 Former Scalabrini client Chef Patrick, featured in two events including an Angolan cooking class at Ginger and Lime, whilst Farhio, a member of Scalabrini’s Women’s Platform, took over the reigns at Rhino Africa and served a Somali lunch and a former EAP client Chef Bilolo cooked up a Congolese storm at Chef’s warehouse and Maison.

Congolese baking duo Mamie and Milka sold delicious cupcakes at Old Mutual. When catching up with Mamie and Milka, they had sold out on their stock – including red velvet, chocolate and vanilla cakes that they had come with. They were tired, having spent five hours baking the cupcakes and then selling from 7am. The day before they had also made a large delivery to Pegasys Strategy and Development as a corporate event for RFF.

Mamie and Milka had met at Scalabrini where they were both members of Women’s Platform. Both became involved whilst looking for jobs. It was through Scalabrini that they were contacted to be involved with the RFF. They enjoyed making and selling the cupcakes and being able to see people’s reactions and happiness. Since they sold out so fast, they have been invited to return next week. There have even been talks about making this a monthly event. About the event they said, “this is an amazing opportunity for us.” This captures the positive possibilities made available through inclusive events like this one. Looking at Scalabrini’s presence throughout the festival, it becomes evident how rich and strong the bonds and networks are.

Jabulani, who runs the Women’s Platform and facilitated Scalabrini’s relationship with RFF, was invited to Reverie Social Table to experience Angolan food. “From start to finish it was an incredible dining experience,” she said. “Chef Julia and Chef John from Angola, participants in the Food Refugee Festival, created five innovative courses perfectly paired with local wines. The cuisine was explained and guided by the chefs, adding to the experience of dining with nineteen other guests from all over the globe, seated around a communal table. The experience was a treat and it felt like I was at home. The Refugee Food Festival team did an exceptional job of exposing talented refugee chefs” The night ended with the festival committing to donate proceeds from Saturday’s event to Scalabrini’s work.

Scalabrini has welcomed the partnership with the Refugee Food Festival, giving a much needed platform to talented chefs. In a country where refugees seek sanctuary and integration, it was beautiful to see a space where their talent and passions were showcased, admired and appreciated by all. Thanks to the Refugee Food Festival, and we look forward to tasting more at the event next year!